Aside from the fierceness that a final typically showcases, Canada entered today’s Women’s International 7s championship against the Netherlands knowing that its opponents were looking for revenge, having lost to the North Americans in pool play.

“It was the level of intensity I was expecting,” Canada captain and championship MVP Mandy Marchak. “We expected nothing less.”

The gameplan was to move the ball around Netherlands, which had some size on Canada and was very good stealing possession on the ground. “Our goal is to get through games with a ruck,” Canada coach David Tait said. “The less rucking, the less work you have to do attacking, and the easier it is on the defense. There were a few times I thought we could have moved the ball quicker, but that will come with traning, and hopefully they’ll start to see the field easier.”

But there was nothing easy about the final bout. Early on, the Netherlands struggled to connect on their offloads, which is key for a team with a size advantage. Canada struggled to stick its tackles and the offense had issues executing its game plan.

“We wanted to attack wide, but they were shutting that down early,” Tait said. “A credit to our girls, they read the game well and started to attack down the blind. We also fell off a couple of tackles in the first half, but we knew going into the game that they like to offload because they’re a big team, so it was important that we got the tackle right, and the girls stepped it up in the second half. And the subs that came on sealed the win for us.”

Laura Stoughton was on Tait’s list of impact subs. “She came on and really did what we were looking forward,” the 7s and 15s coach said. “She kept the ball moving well, talked on defense and shut down the inside, forcing the ball wide. Also, our unsung hero, who is always a forward, is Kelly Russell. She really dominated the contact area and did a good job of securing the ball.”

“Our team has been together for three or four days,” Marchak added, “and before that, nothing since the World Cup [in September]. Yes, it helped [to have World Cup-ers on the team], because we’ve played together. But also part of the squad are people who have never played 7s before, and to come in here and play like they’ve been at it for years and help us to a final’s win, was unbelievable.”

One such player was wing Magali Harvey, who rebounded from an unfortunate stiff-arm that allowed a try, to scoring the game-winning points. “The game was even more intense than I was anticipating,” the former U20 player said. “The World Cup veterans were very useful. Every time I needed help, they showed me where to go, what to do, and without them, I probably wouldn’t have played as well.”

The fan support, which included the Canada men’s team, played a part in the win as well. “It was great,” Marchak concluded. “We have tons of fans and family who came out, so that support was huge for us.”

Spain squeaked by France in round 3 for top-pool honors. (Dobson Images)

Only Spain exits the USA Women’s International Invitational wholly happy and with an unblemished record. The reigning European Women’s 7s champion played its toughest match of the day against France, both of which entered the final round with wins against Canada A and the Hawaiian All Stars.

But the day belonged to Spain, who held onto a 14-12 win to clinch the top seed in the bracket. France advances to the semifinals tomorrow and will face the Netherlands, the other pool leader.

The Netherlands followed their 21-15 win against the USA with an 89-0 drubbing of the Tyrolian Selects. The run-up was necessary, however, as both Canada and the USA sat at 2-1 heading into the Netherland’s final match.

The other semifinalist was to be determined in the USA v Canada match. The USA won 7-5 in an incredibly physical match that saw several of the players from the teams’ final 2010 Women’s Rugby World Cup match face to face again. If there was any residual angst lingering after the Eagles 23-20 RWC win, the Canadians certainly excorcised, beginning with the opening hit on the kickoff. The USA was up for the challenge and worked the ball into Vix Folayan’s hands, who fended Laura Stoughton to the ground before streaking down the sideline for the score. Christy Ringgenberg converted for the 7-0 lead.

“We played five bad minutes all day,” Canada coach John Tait said, “and it was the first five minutes against the USA. We sank into our shells, and although we were aggressive on defense, we weren’t attacking on offense.”

But after five minutes, the teams began to show some fatigue, which resulted in some slower support from the USA. Heading into the break, Canada built some momentum, carving up a staggered USA defense, but unable to convert the breakaways into points.

Canada regrouped and began the second stanza with equal gusto. Canada split the defense untouched on the kickoff and their burgeoning confidence became tangible. Play was still messy as the players tapped the reserves, but Canada found itself in the USA’s half rather quickly. The ball worked to Stoughton on the wing, who turned the corner then sat Lauren Hoeck down before crossing the try line. The conversion was a difficult angle, and the try would end up being the last points of the match, 7-5.

It was a small victory for the Americans, who fell short of the semifinals by 18 points and ultimately short of expectations.

Canada A got its only win of the day in the final pool match against the Hawaiian All Stars in a 26-0 victory. 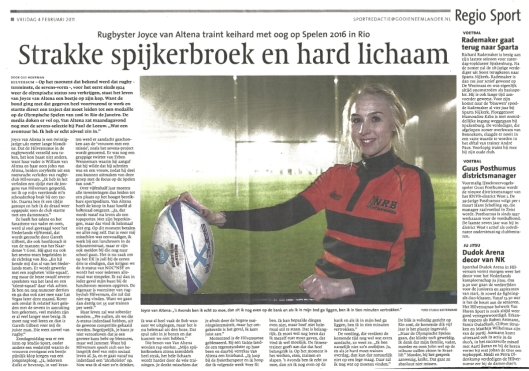 Hi all:
Great news, we will be webcasting all 17 matches of the women's tournament taking place outside Sam Boyd Stadium in Las Vegas, thus making the entire tournament available to viewers around the world!  All the Pool matches on Friday, the Plate Semi-finals, Consolation and Final on Saturday and the Cup Consolation on Sunday will all be webcast on USA Rugby's UStream channel:   http://www.ustream.tv/usarugby

The Women's Final on Sunday will be broadcast live by NBC and/or NBC Universal and the Women's Semi-finals may be carried by the world feed.

Please pass the word on to your fans and supporters and ensure they tune into UStream and NBC/NBC Universal to cheer your team through the tournament.  In addition, we are providing the opportunity to place verbal advertisements to be read by our webcast commentators, including Phaidra Knight, a USA 7s and 15s Eagle, and Wendy Young, of Your Scrumhalf Connection.
As always, thank you and please let me know if you have any questions,
Sincerely,
Alex